As he passed the sign declaring HELL IS REAL, 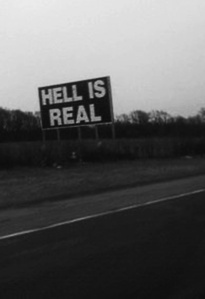 “Ain’t nobody who lives like us doesn’t know that,” he said, glancing at his silent companion. “And sure as shit, you and I know it’s true.”

The thing in the passenger seat slid its one gleaming eye toward him, a slight dip of its head acknowledging that yes, of course they both knew that.

Tyler had met his demon years before, standing in his path at an old familiar crossroads. And since that night, it had stayed beside him, because kin always knows kin.

Kin always stays with kin, especially in a family like theirs.

There had been no deal between them. No binding oaths. Just recognition of the truth, and a promise to never, ever look away.

Hell was real. Threaded through the corn fields, collected in sleepy diners, all the tired kinfolk spoke the truth with their very existence. Those bits of black matter, connecting everything, seeing everything, never looking away.

There was no way they could.

Hell was on the TV. Hell was on the radio. In every petty war and grim announcement on the eleven o’clock news, you could see it. You could know it. And Tyler kept driving, because it helped him feel like there was an escape somewhere. Some place he’d finally know rest. Where his demon would meld into him and finally take him away from this place.

Because hell wasn’t under the ground. It wasn’t a place separate from reality. Hell was the world he continued to trudge through, no matter what.

“Sure is,” he muttered under his breath. “It sure is.”

Another hundred miles to go.

He knew he’d wonder longer than that whether one of his hopeless kin put up that sign.